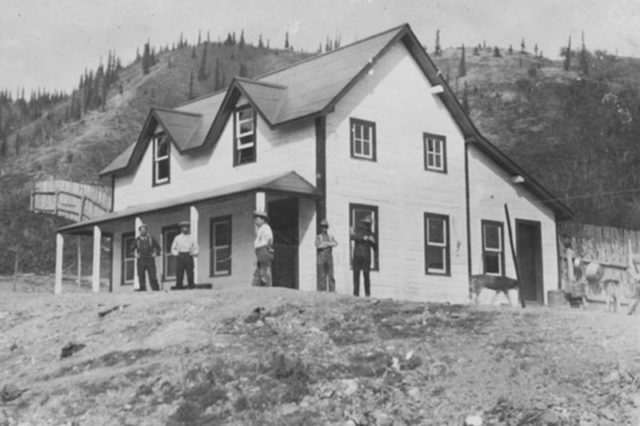 Rampart House, Yukon, then (above)… and now (below).

Scottish-born Daniel Cadzow started his own independent trading post at Rampart House in 1904. The Hudson Bay Company abandoned it in 1894 because trade had became too overrun with whalers to the north and Alaskans to the west.  Now, the Yukon Government refers to the buildings as Cadzow’s House.

Rampart House was built near the mouth of Boundary Creek just east of the US-Canada boundary and was an important gathering place for Gwich’in living along the Porcupine River. It was one of the earliest Yukon places where the Gwich’in met and interacted with fur traders, missionaries, police and government officials.

Daniel’s post was successful and he married Monica Njootli at Rampart House in 1909, officiated by Bishop Isaac Stringer.

Two years later in 1911 smallpox struck, which meant many contaminated buildings had to be destroyed and First Nation families were quarantined on an island opposite the settlement.

Afterwards, Daniel built an elaborate new house as well as a store and a warehouse and his business flourished from 1911 to 1922. At one point, Daniel owned a 43-foot, stern-wheel, steam-powered boat called 2nd Rampart that was built in Dawson City.

The location was also used as an important Anglican Mission and the Northwest Mounted Police established a post here between 1913 and 1929.

Sadly, Monica died in February of 1919 and by 1927 there were only four or five families living at Rampart House.

Daniel stayed there up to the time of his death in 1929, following a crippling bout with rheumatism.  His second wife, Rachel (Netro) Blackfox, along with the entire community, moved to Old Crow. The last people who lived at Rampart House were Gwich’in, but they also relocated to Old Crow by 1940.

Cadzow’s home was elegant and advanced, complete with a gramophone and kerosene lanterns (the only building not lit by candle.) A dresser he built still stands in the building.

The store still stands, as does the warehouse and his old home, which he built because the Hudson Bay Company buildings were crumbling.  The Vuntut Gwitchin First Nation, which co-owns the site with the Yukon Government, has been restoring it since 2005. – Source: uphere.ca,  Source: sightsandsites.ca, Source: old crow.ca

The history of Rampart House is covered more extensively in this pamphlet by Yukon Tourism and Culture.

The following online book excerpts may give more insights to Daniel and his times: