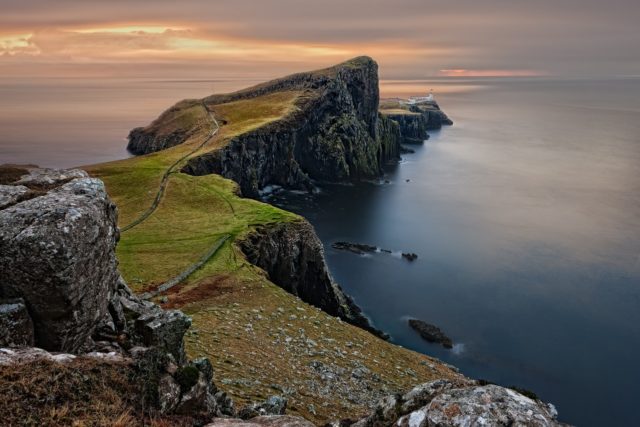 “What of the Cadzow family? Seven centuries separates them from their disastrous choice of the losing side.”

By Ian Hamilton, Q.C.
Reprinted with permissions from the Scottish Banner, July, 1996.

Near the town of Hamilton there is a plantation of oak trees that dates back to the Battle of Bannockburn in 1314. In that year, the nearby Bothwell Castle was still garrisoned by the English. The garrison was commanded by a father and son called Walter fitz Alan and Alan fitz Walter. They are the progenitors of the great semi-royal House of Hamilton and they planted the oaks that are still growing today.

This is how it came about.

When it became obvious to the English knights that the day was lost at Bannockburn they set off in panic at the gallop. Some, such as Edward II himself, headed for Dunbar. But others, knowing that Bothwell was still in English hands, headed down what is today the line of the main motorway south. It brought them to Bothwell and the safety of an English garrison.

But these were fickle times. The two Normans must have felt dangerously isolated. They were now cut off in a hostile country. It may not be a story to be proud of, but one can understand what they did next and why they did it. As each rider came galloping into the castle, they swiftly stripped him of his armour and thrust him into one of the numerous dungeons. A knight’s ransom was worth a fortune, and horses and armour constituted one of the main sources of moveable wealth of the middle ages.

Father and son awaited the arrival of Bruce with grins on their faces, hoping that they would be rewarded with the stewardship of the castle they had just betrayed.

Robert the Bruce was not daft. Indeed, he was one of the wisest kings of medieval Europe. There was no way that he was going to trust these two rogues with Bothwell Castle. If they could turn once, they could turn again. On the other hand, they had greatly enriched his country and in these unsettled times the accession of two trained soldiers was not without its value. Near to Bothwell was the smaller castle and the Barony of Cadzow. The castle and lands had been forfeited to the Crown, as the Cadzow family had gone over to the English. The two English turncoats were given Cadzow Castle and its lands as their reward. But Bruce was still cautious. He gave them a short lease. They were permitted to take only one crop, and thereafter the lands would revert to the Crown. This is where the oaks came in.

It is difficult to imagine a more slowly growing plant than an oak tree. I can still picture the conversation that went on between these two soldiers as they walked across their fair acres. They had won them by an act of treachery, but they held them for only one harvest. They could never return to England. They now had to make their lives anew in this turbulent country.

The lands were bonnie. Then as now, the Clyde valley was one of Scotland’s gardens, and the river Avon ran nearby, clear and sparkling as though it had its springs in paradise itself. One crop? Then let it be the slowest growing crop of all. Let it be oak trees. Thus in the year of Bannockburn the Cadzow oaks were planted.

The father and son had several things on their side. The first was King Robert’s sense of humor. Across the centuries comes the echo of a laugh, and the folk-memory is of one who loved a joke, even when it was against himself. Yet, there were more practical issues to drive the King to confirm these two tricksters in their lands. To the south stretched the estates of James Douglas, Bruce’s great captain. There would be no more treachery while the Douglas was nearby. But above all, Bruce had given his word that they could take one crop. In those far off days not every title of land could be reduced to writing, and it was important that verbal grants by the king himself should be seen to be honoured. The country was settling down. The enemy had been driven out. Stability was needed. The two soldiers were confirmed in the lands of Cadzow as long as the oaks still grew.

Where then did the name Hamilton come from? Following Norman custom, each son took the Christian name of his father, with the word fitz added — meaning son of. To that name was added the name of any land that they held. Thus Alan fitz Walter, the son of Walter, was further described as De Hambelton, i.e. of Hambelton, a small estate that the two soldiers had owned in England. Gradually, the Hambeltons became the Hamiltons, and the name was transferred to the great burgh that grew up under their protection. The Hamilton family prospered, though there are some who say that they were no more fussy how they prospered than how they first gained their lands. They intermarried with every great family in Scotland including the royal Stewarts, until they were only a baby’s breath away from the throne itself. Today they are the premier dukes of Scotland.

What of the Cadzow family? Seven centuries separates them from their disastrous choice of the losing side. They live on the Hebridean island of Luing, twenty miles from where I write these words. They still regard Hamiltons as incomers and upstarts, yet right down through the centuries they too have thrived. They are internationally successful cattle breeders, and I am often in their company. When I am with them there is one subject I know better than to mention.

They can put up with me as a Hamilton, but they are still bitter about the oaks.

Ian Hamilton was one of the young Scottish students who “liberated” the Stone of Destiny from under the Throne of England in a daring adventure in the 1950s that re-ignited Scottish nationalism.  Yes, he’s THAT Ian Hamilton.

Ian Hamilton has written other books: A Touch of Treason, A Touch More Treason.