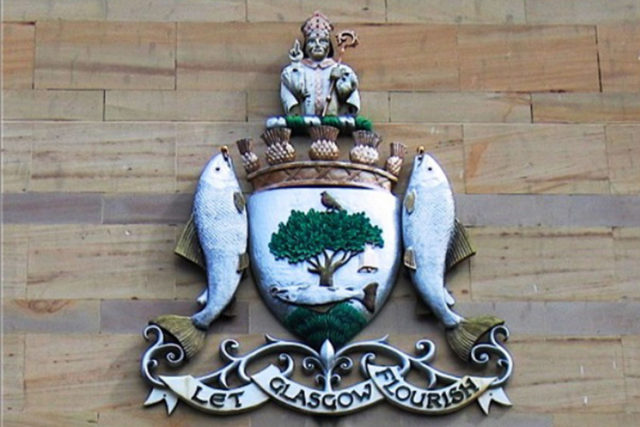 The armorial insignia of the city of Glasgow contains the earliest reference to Cadzow that we have found so far.

The elements of the insignia tell of the legends surrounding St. Mungo, a priest of the Celtic church who lived in the 6th century and died in 603. From this, we can surmise that this story of Hydderch Hael, King of Cadzow, occurred in the 6th century.

The story, quoted below, is copied from a pamphlet printed by the City of Glasgow District Council.

The fish with a ring in its mouth is a salmon and the ring was a present from Hydderch Hael, King of Cadzow, to his Queen Languoreth.

The Queen gave the ring to a knight, and the King, suspecting an intrigue, took it from him while he slept during a hunting party and threw it into the River Clyde.

On returning home the King demanded the ring and threatened Languoreth with death if she could not produce it. The Queen appealed to the knight who, of course, could not help and then confessed to St. Mungo who sent one of his monks to fish in the river, instructing him to bring back the first fish caught. This was done and St. Mungo extracted the ring from its mouth.

The scene is represented on the counter seal of Bishop Robert Wyschard, made about 1271.

A related 6th century story centers around Rederech, the 6th century ruler of Strathclyde. Strathclyde is an ancient Kingdom of the Britons with its capital at Dumbarton, the birthplace of St Patrick. Rederech’s stronghold was a fortress set dramatically on Dumbarton Rock, a massive Gibraltar-like volcanic plug. Legend has it that his summer hunting lodge lay eastwards at Cadzow, where St Mungo converted him to Christianity in 568.