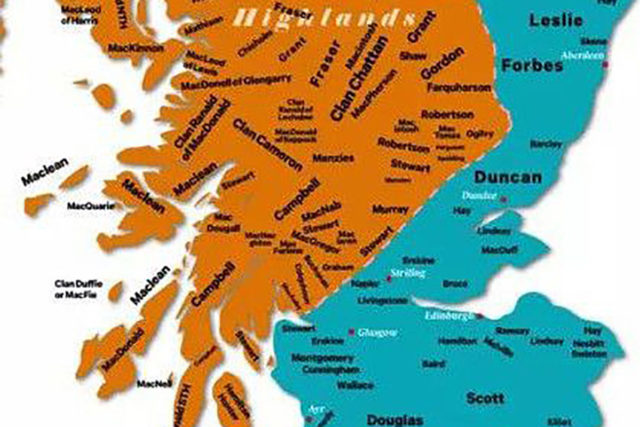 To put the origins of the surname Cadzow in some context, it is helpful to understand how the association between surnames and families, clans, and tartans evolved in Scotland. But, if you think you can trace your family back several centuries just by finding men of the same last name, think again. The use of a standard last name to denote members of a single family is a relatively recent development in Scotland.

The following information is excerpted from the Collins guide to Scots kith & kin: A guide to the Clans and surnames of Scotland HarperCollins Publishers, Glasgow 1989 (revised edition).

In 11th-century Lowland Scotland, some territorial names were being introduced as surnames. For example, a man could be named Cadzow simply because he lived on the Barony of Cadzow lands, near modern-day Hamilton.

Then came centuries of surname proliferation as men became known by:

This last style, called patronymics, was popular when surnames first came into wide use in the highlands in the 16th century. In this practice, members of a generation took their surnames from their father’s Christian names. For example, a father named David would have a son called Thomas Davidson, whose son would be called William Thomson, whose son would be John Williamson.

Vestiges of the patronymic naming system remains in Scottish surnames even today. The well-known surname prefix Mac simply means son. It is popularly believed that names beginning with Mc are of Irish origin and those with Mac are Scottish. This is not the case. Mac is the standardized prefix used today, but a hundred years ago it was commonly abbreviated in written records to Mc or even M’.